First - you have simply got to hop over to the Minick/Simpson blog and see Laurie's bed. I swear, I always love to read her blog. Usually I end up chuckling and feeling like it's a better day when I finish and today is no exception. And of course, I love their fabric.
Back in Missouri, it's Saturday - washday - the sun is out and the snow should be gone (except for the giant hills) by the end of the week. Oh whew! Good ole groundhog. I'm sure we'll get another blast of winter but for now - whew! 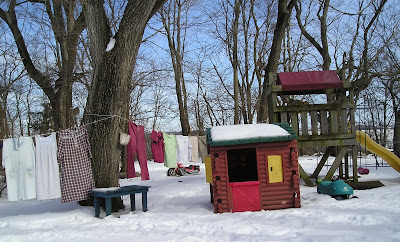 This isn't a groundhog but he (or she) has been visiting since it got very cold. One morning when I opened the chickenhouse, there it was, curled up asleep in one of the chicken nests. Apparently it had been hiding the night before when I shut up the house. It's probably the same possum that has been eating cat food on the deck. I had checked with my brother Jim (he a vet) who told me they don't carry rabies so that worry was gone. BUT before shutting the house up that night - it was still asleep - I googled possums to find out what they eat - besides cat food. Apparently they mostly eat mice, snakes and insects - fine with me. It probably came in to catch the mice that always follow the grain. It was a lot warmer than outside so he stayed. 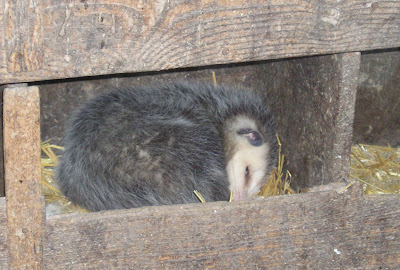 It's been here about a week. It's asleep when I gather the eggs at night and asleep when I fill the feeders and waterer in the morning. Don't tell Pep but I put a little cat food out for it :)
On a totally different note, Happy Birthday to Mr. Lincoln. And since this is the 150th anniversary of the start of the Civil War, I'm making (with a lot of help from Tori) a homespun quilt using Lincoln's Platform blocks. It's coming along splendidly. The piecing is easy and the visuals are - wow. Wait until you see it. We'll probably kit it.
More clothes to hang and a quilt to make.
Posted by Jan PATEK at 10:30 AM