At least the snow is gone in this part of Missouri. Thanks God. We were rather tired of it. It is a lot grey and gloomy - and rainy. I think someone mixed the months up. It's supposed to be windy this month - to dry up all the moisture from the snow - and THEN we have April showers. 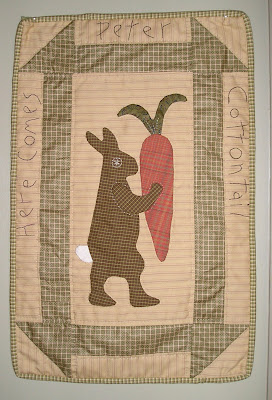 Anyway - spring is on its way and I made my Peter Cottontail Miniquilt to celebrate It's not on the website yet but if you want one you can email Tara at info@janpatekquilts and order one. Or better yet, join the Mini Club and save some money. Which brings me to a problem it seems we were having. Apparently somehow the page for Linda's Club (which we no longer have) and the Mini Quilt Club got mixed on the website. Tara started getting quite a few people joining Linda's Club. She very nicely emailed or called them and told them that we no longer had that club. One lady had a friend who had just gotten her latest Mini quilt and called to question. So Tara figured out what was going on and got in touch with Shannon (our weblady). We're pretty sure it's fixed now but if you tried to join the Miniquilt Club and were told that it was defunct, get in touch with Tara at the email address above or 816-632-7632 and she'll fix it for you. Sorry about that. 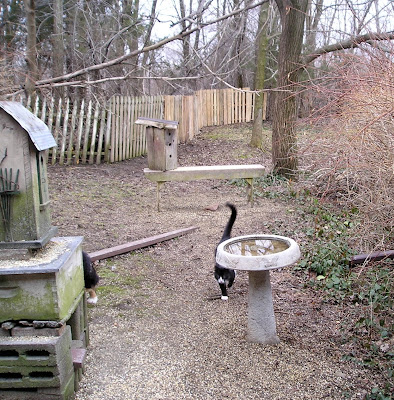 This is my new fence behind the birdfeeders made out of skids. I really like it. Not too many birds around with Dueces in the area. I want the leaning dead tree cut up for firewood. I don't think it adds much to the ambiance but Pep says that Dueces uses it to cross over to the big tree on the right. I think the exercise would do Pep's little mountain lion good. He is quite a climber.
The dogs on their morning constitutional when I fill the feeders - Wooly Bully, Sniff (Jake's dog) and Sumo (Zoie's dog) 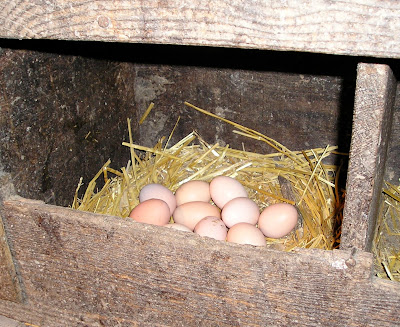 The other day, I was hurrying around as usual, getting all the chores done and everything taken care of. Cullen was here and wanted to gather eggs. Usually I do that at night. I started to say "no". Then I thought of all the times I had gathered eggs at my Grandma & Grandpa Laird's house. They had a big garden each summer and birdbaths and a grape arbor and a chicken house.
So we stopped everything and let Cullen build memories.
Posted by Jan PATEK at 11:57 AM 5 comments:

Spring has got to hurry up

I don't know if you can see the cardinals or not. I think there are 7 or 8 in the trees. I counted 23 males out by the feeders the other morning when it was really cold. 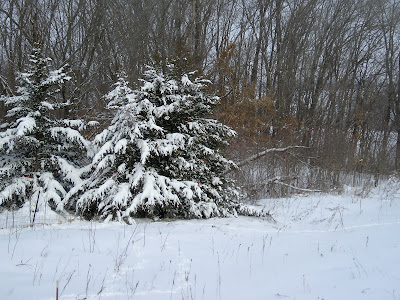 This is our view off of the deck. The pond is to the left behind the trees. And it is beautiful ... BUT.... 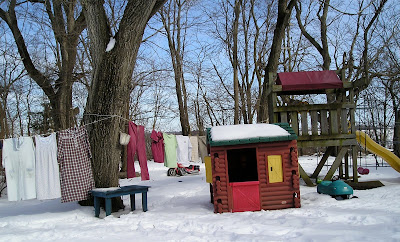 Can you tell that I am soooo ready for spring?
Posted by Jan PATEK at 4:09 PM 6 comments: