First - the winner part.
There were so many awesome suggestions that I may have to design something else with oak leaves and acorns just to use a few of the names.

It was really hard to choose 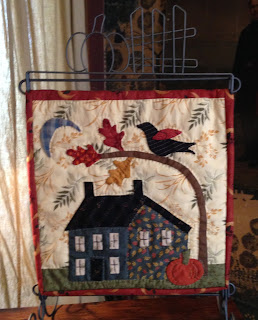 but choose we must.

This is 2015 Acorn Lane named by Glenna Davis and she left her comment on the September 2nd post. 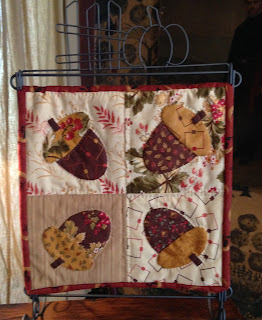 Glenna, if you will send your snail mail address to Tammie at janpatekquilts@centurylink.net she'll get your kit out to you.  And congratulations.

Meanwhile I'm leaving for Illinois where I'll be giving a lecture and teaching a workshop for the Pride of the Prairie Quilt Guild and of course taking a lot of my appliqué with me - Market looms.
Ladies, would you please remind me to have someone take pictures with my camera. 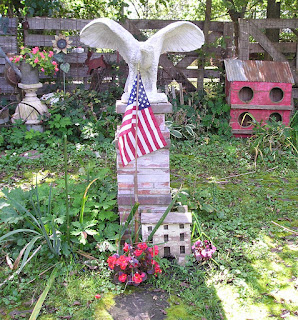 A Name, A Name, my Kingdom for a Name

Well, really only a quilt kit.

I'm off to Iowa for a couple of days, taking my little tablestand quilt along, 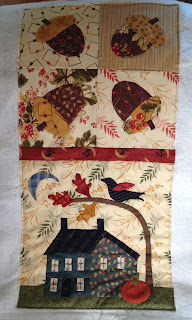 hopefully to finish the quilting.  One of my favorite things about these little quilts is that I have time to quilt them. 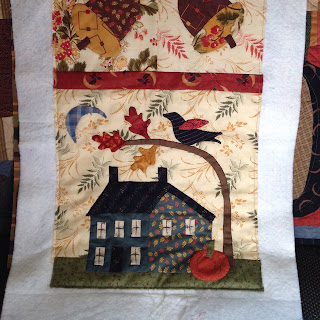 You can give us your choice of name either here in the comments section or a couple of posts down.
We'll take them all into consideration when it's quilted and bound.   Then I'll have Tammie and Brittany chose one each and the winners will get a free kit.
If you've already entered you don't have to enter again - unless of course, you're thought of another name.  :)

Thought I'd leave on a pleasant note.
Keep quilting ladies. 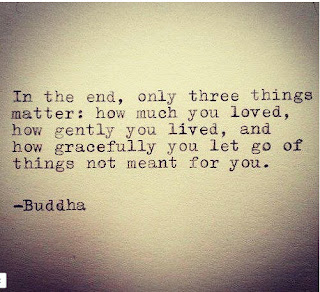 It's been a very hard day, especially after yesterday.  Last week the girls told me that a lady(a shop owner) from New Zealand had called about a Mystery Quilt BOM from a couple of years ago.  She wanted a refund of her moms money - all 12 months because she had returned some of the blocks.  Tammie looked into it and we only have a record of receiving payment for 3 months.  This was when Tori was here and she kept lousy records and didn't send things.  PayPal, however, keeps excellent records.   We can't find a record.
She called again today before Tammie could call her back.  The long and short of it is that I told her we would refund the 3 months immediately and would be glad to return the rest as soon as we had some type of proof of payment.  She may have payed it - it really is possible that Tori got payments for months and didn't send the blocks but you'd think there would be some record on Paypal.   I just don't think asking for some sort of verification is unreasonable when we can't find a record.

Apparently I had replied to a Facebook message in 2013 saying that Tori had said it was all her fault and she didn't know why she had missed it.  I don't know why she missed it either but Tammie and Brittany can't find the payments either.  The woman's manner is bullying and abusive and Tori may have just been caving in since she kept such lousy records.  She has threatened to put things out of context on Facebook and report me to Moda.

To give every dog her due she has been replying to the email address on the last email Tori sent which has been defunct since Tori left.  So I'm sure she's very frustrated.  But I have a website and a blog with the current email address.   And yelling at me has never been a good way to get a positive response.  That's why I design instead of owning a shop.
I have a very short tolerance for rude, bullying people.

As of right now, I'm going to return the money to her mother.  It's probably not a good idea to cave in - Like Chamberlain to Hitler - but I'm going to do it anyway just so I don't have to deal with her again.
Anyway, all of this is not simply to whine :) about lousy customers but to say "please don't message me on Facebook if you really need to get in touch with me."  I enjoy Facebook when I have time but I quite often don't have much time so I won't see your message.  My current email is always on my website and my blog. 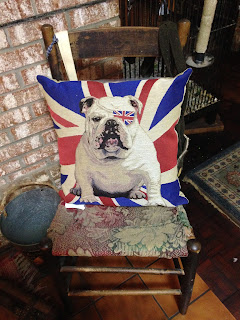 On a much more pleasant note, this is the pillow Pep gave me for my birthday.  Isn't it awesome?
I took a picture and sent it to all of the kids and my sister on my phone.
Nancy thought for awhile that it was a real bulldog sitting in front of a flag on the chair and wondered why he gave me another bulldog.
It does look real doesn't it.
And Spike is more than enough bulldog for now :)

Wow!
First, Hawthorn Ridge is shipping to your local quilt shop as we speak.
It may already be there.
Lots of yummy rich, dark colors for Fall and the holidays.

This is the Hawthorne Ridge BOM. 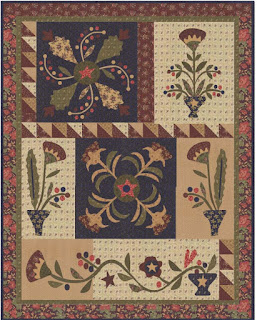 You can buy the pattern for the BOM and all the new Hawthorn Ridge patterns from us now by clicking here.
And watch the Craftsy Website for the kit. 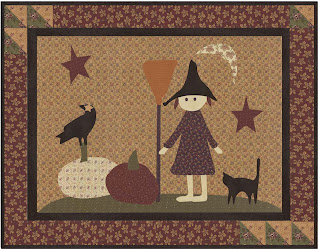 This is Wednesday Witch, one of my favorite little Halloween witches.  You can buy a pattern or a kit to make Wednesday by clicking here 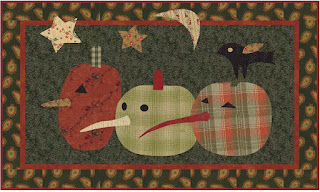 This is Punkin Heads (our special this week) so hop on over to the store and pick up your kit or pattern.  Halloween is just around the corner.


I don't usually show works in progress but I am this time because I'm stumped.
This is my Fall Table Stand quilt in progress - just the bird left to appliqué - 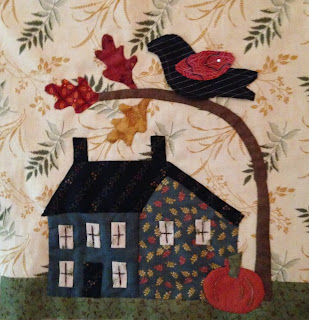 with a house, tree, bird and pumpkin on the front 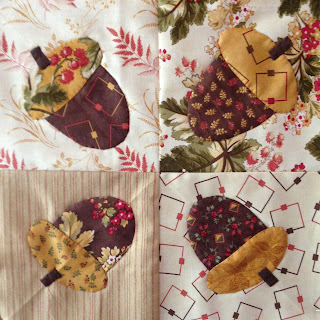 and 4 acorns on the back.

I don't have a name for it yet and I'm busy, busy, busy.  (I'm giving a lecture and workshop this month at the Pride of the Prairie Quilt Guild in Illinois as well as taping a show for PBS in Iowa.)
Anyway, I don't have time to think up a name for the little quilt.

If you will put a name in the comments section, I'll have Tammie and Brittany pick one at the end of the month and we'll give a kit away to the winner.  Maybe two if they just can't agree.