It seems that our days when it's in the high 60's are over here for awhile - probably quite awhile. At least we're not far enough north that we're getting snow already. I think we were already last year though. 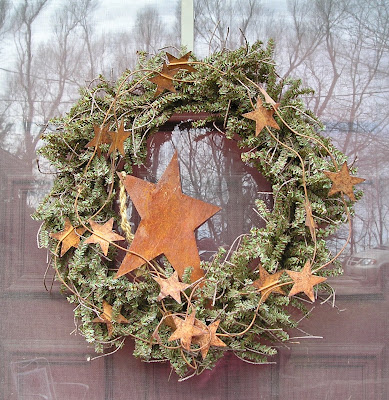 The house is slowly changing seasons - Bittersweet wreath returned to the peg in the back room, Stars & evergreens on the door, twinkly lights overhead. 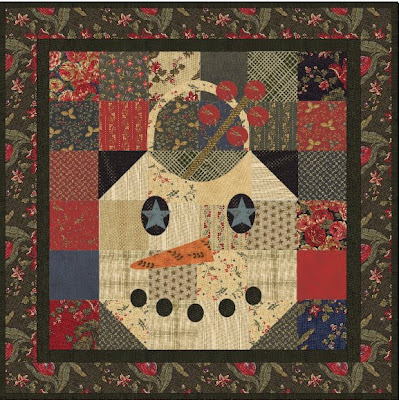 Dresden Turkeys came off of the back wall and will return to the loft while our latest Sue's Snowman Basket came down to the house. This is the latest Mini Quilt Club offering so if you belong to that club yours will be shipped next week. I really like snowmen because they're great for Christmas but then carry over into the new year since winter usually carries on after Christmas. And it's quick and easy and along with "Here Comes Santa" should give you something to stitch on each night.
And speaking of Christmas and stitching, a gift from Jan Patek Quilts to you - a free pattern or book (excluding KC Star and Quiltmania books) will be included with every order from now until the 1st of the year. That includes our Club & BOM shipments. 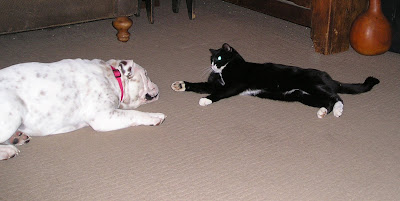 I'm working on next year's Mystery Quilt and the Blog Hop Pumpkin Tablerunner (still holding onto Fall a little - in my heart at least) every morning and night. It is pretty cold outside so Deuces decided to stay in and entertain us by playing with Spike while I stitched and Pep watched TV. They really like each other and didn't tire of playing until Pep had to get ready for work.
The Blog Hop starts Monday and we have some goodies in mind - Dec. 5th - 9th. See you then.
Posted by Jan PATEK at 11:09 AM 7 comments:

The last 2 years Kelly and I have cheerfully gotten up before the crack of dawn to join the throngs of shoppers looking for a deal on Christmas goodies. This year there just wasn't anything we wanted that was offered. So we just as cheerfully slept a little late after a great Thanksgiving dinner. 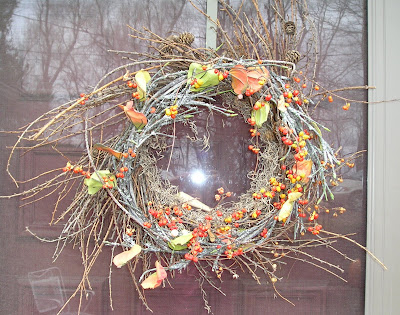 It was supposed to start raining Friday night so that morning I planted some bulbs (a little late here) and Jake turned over a couple of beds in the garden to ready them for Spring. We have some walking Egyptian onions that refuse to stay where they're put and we always have go get them out of the other beds or they'll take over. Grandma Laird's iris are safe for another year, thanks to Jake.
And our house and garden still have most of the vestiges of Happy Hollow. I do so love Fall. 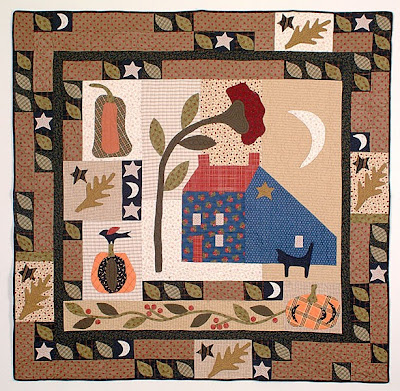 I pulled all of the marigold plants, shook them a little and then laid them in the beds. Playing in the garden was a great way to spend the day. Then in the afternoon, we jumped in the car and went to Max's to have some post Thanksgiving pizza and cake with Max and Quinn and Cullen. Michele got home - she's working at Sears for the holidays and had gotten to work at 3:45. She said it wasn't too bad, all in all, for Black Friday.
Can you tell I'm not quite ready to let go of Fall?
I'm afraid Winter is on it's way though. The temperatures have drastically fallen.
I have one awesome potted plant that doing it's best to hold on. I almost feel like bringing it in the house tonight. Probably will. 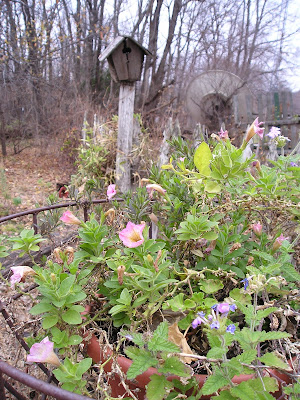 We're getting excited and ready for the Moda Blog Hop though - Don't forget - December 5-9th.
Posted by Jan PATEK at 3:27 PM 5 comments:

But let's have Thanksgiving first, please.
I just love our Dresden Turkeys wallhanging. It is, of course on the wall at our house. If you haven't gotten a kit already you probably won't be able to get one made for this year but you could be stitching on Thanksgiving Day while watching (or not watching) the football games of choice. Be sure to order a Dresden Tool too as it makes things so much easier. Then you can feel very self satisfied as you're already ahead of the game for next year :).

"Santa's Coming" is our newest Wallhanging Club quilt so if you belong to that club, yours is on it's way. If not, you have plenty of time to order a kit and get it made in time. The piecing is really easy. 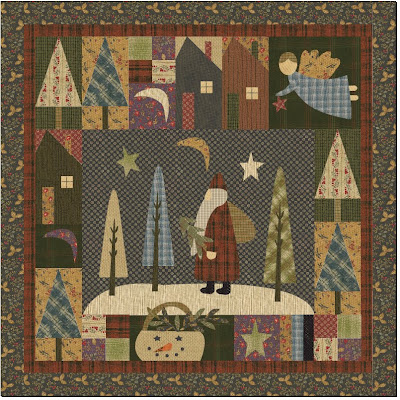 If you happen to live in France or Europe, you can get the pattern in Quiltmania's newest magazine Simply Vintage. The directions, of course, are in French.
And be sure to keep checking in for Moda's latest - this time very short - Blog Hop starting December 5th. I'm not sure which day I'll be posting yet. We'll all be downloading the patterns and recipes we did for the schoolhouse last spring. And I decided to take the block and make a tablerunner/wallhanging so I'll also be downloading the pattern for that. All of this downloading, of course, depends on whether I can sweet talk Michele into setting it up for me. Have I mentioned more than a million times that I am NOT a very left brain person. I'm sure she will, she's very nice.
Well, off to designing, the grocery store, picking up feed at Coop, Jake's school Christmas parade tomorrow, picking up Cullen and Quinn for the parade, yada, yada, yada.
And tonight I will get to sit and stich. :)
Posted by Jan PATEK at 9:02 PM 6 comments: 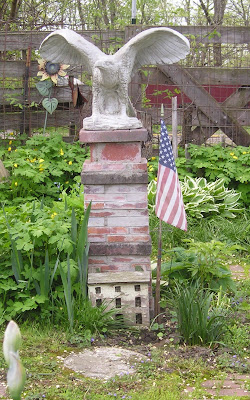 So Veteran's Day is pretty important to us. And it's a day for the country as a whole to stop and remember to say "thank you" to all of the men and women (my aunt Janet was a WAC) who have served their country so well and kept us all safe.
We thought it would be nice to celebrate Veteran's Day by cutting the price of two of our patriotic quilt kits. 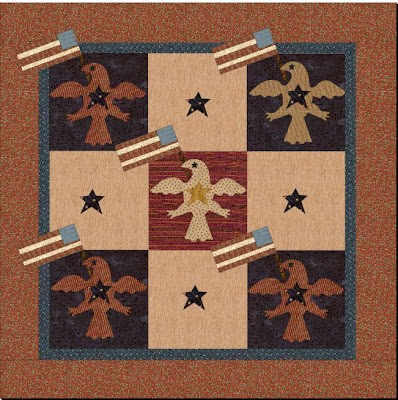 My idea was to offer Jake's Eagles and Four Flags for 20% off today. But Kelly sends out our emails and she made it 20% off for a week. Good idea Kelly. 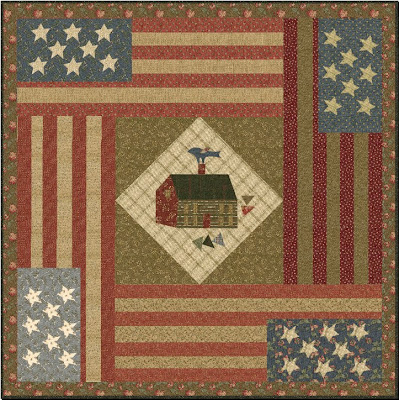 The kits would make a nice gift for a quilter who has served or has a spouse serving. And really, they're both pretty simple to make and could easily be done in time for the holidays.
But you don't need a quilt to say "thanks". It's just one way of remembering. Our local veterans were selling things outside of Walmart this week. I didn't need a cap but I gave some money anyway. When they said thanks, I said - "And thank you!" Let's make sure we do.
Posted by Jan PATEK at 3:34 PM 2 comments:

It's Good to be Home

It is indeed good to be home.
Once here, besides all of the packing and unpacking, washing clothes and generally detoxing from a week away, I had promised my church - which is an hour away in Kansas City - that I would bring quilts and kits and appear two nights at an event they're having. If you're in Kansas City, Missouri Crossroads church at 79th & Main is presenting the musical Big River. It was this weekend and next weekend. It is well worth seeing.
Next weekend - Friday and Saturday nights at 7:00 and a matinee Sunday at 2:00 - my quilts will be there but I will be at home. It's an excellent production.
To back up a bit, I'm rather late posting about Market but better late than never, I always say.
The last day of Market was Halloween. I didn't go with Jenny Doan so I didn't have to be Raggedy Ann. I did take my Witch Is In quilt though. (I always say "it's not a Halloween quilt, it's a 'statement' quilt"). 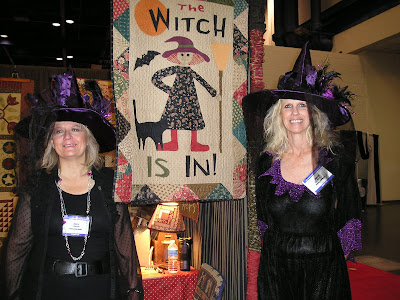 But it is fun to take pictures of ladies in witch costumes. I grabbed my camera when I thought of the pictures but neglected to get the names of the first two ladies. I just love the purple. Sorry ladies. 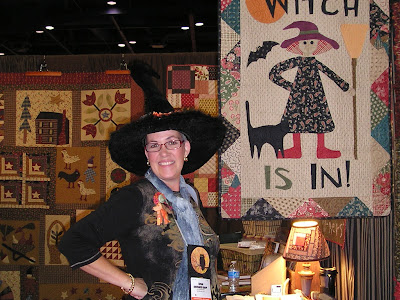 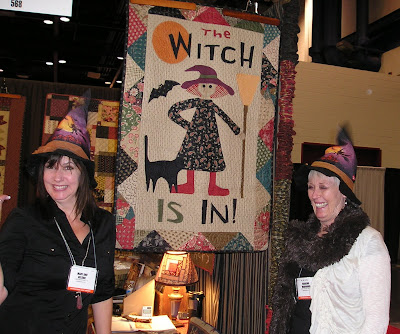 And we spotted Mary Ann Nelson and Marsha Harward across the aisle at the Moda booth. If you look closely the tips of their hats are moving. Too funny! 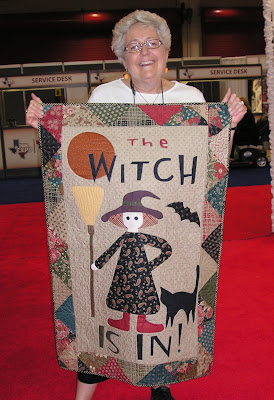 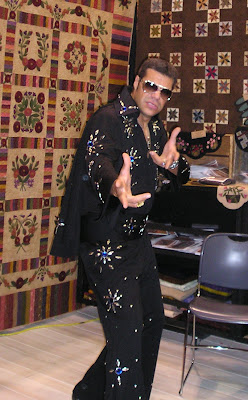 Nick from Primitive Gatherings was absolutely awesome as Elvis. 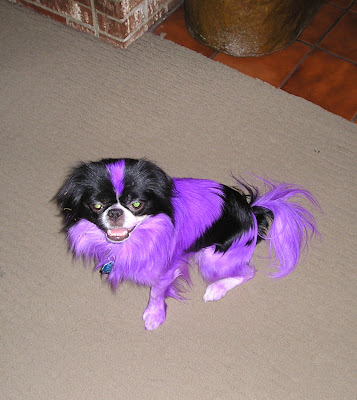 Back home, Zoie's Japanese Chin turned purple for Trick or Treating.
Kelly was taking care of the animals and farm while we were gone but had stopped bringing Spike out. He got too upset every time he came and we weren't here. He's only 7 months old and it's the first time we've been gone for any length of time.
She brought him out about a half hour before we got home. When we walked in Spike got so excited I almost thought he was going to have a seizure or something. He kept falling over, wiggling and jumping and running between Pep and I. Dueces (Pep's cat) on the other hand was somewhat aloof. He would follow Pep from room to room and sit down with his back to him.
As we slowly unloaded the van over the next two days, every time we opened the door Spike jumped in and wouldn't get out. As far as he was concerned the van was not going anywhere without him again. I had to leave the door open a couple of times and just go in the house. 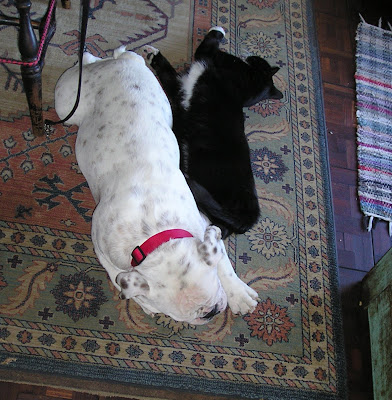 Tuckered out but happy!.
Posted by Jan PATEK at 4:47 PM 7 comments: