First - we need to post an extension of the deadline in the Mystery Quilt Contest. We had a little trouble getting the email out so we extended the deadline to Monday the 30th. You have through the 30th to guess and Zoie will draw a name on the 1st from the correct guesses. What does the grandfather clock have to do with the Mystery Quilt???? Well - nothing but there is a story that goes with it. 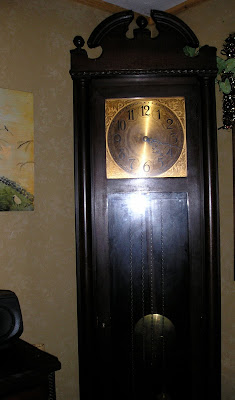 As you know if you read my post last month, Pep and I have been married 40 years as of October 18th. The first time we went to his parents home I saw this Grandfather's clock and just loved it. It was Pep's mother's clock and had originally belonged to her father. Pep remembers his grandfather letting him hide in there when they all played hide and seek. The clock stood in the corner of their living room for 40 years that I know of - but it didn't work. Eunice had jewelers over on several occasions to try to fix it but it just didn't work. Since she loved the way it looked - just like I do - and it had been her father's, it stayed in the corner of the living room. Last month before the house was sold, my son Brian went to Chillicothe with me to bring the clock to our house. He thought we should put it in the living room but that would have called for a major upheaval and furniture rearranging - not one of my favorite chores. And there was a space in the back bedroom where it would just fit. We got it home just as it started raining and put it in the bedroom. The weights had gotten askew and the lock was stuck so I had Pep come open the door and straighten things out. He set it and started the pendulum.

It's been working ever since.
And it chimes. Some clocks have a lever to turn off the chimes but not this one.
And it's in the bedroom with the crib :)
We can just stop the pendulum and that will stop the clock. We've had to do that a couple of times when people need to sleep but it has started up again each time we reset it.
And I'm not moving it! It might stop working. It seems to like it where it is.
Pep's mother would have been so excited - maybe she is!
Posted by Jan PATEK at 4:25 PM