See - the path to the door is still clear. Huzzah! huzzah! 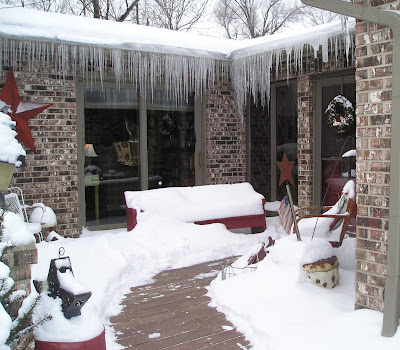 This is our neighbor up the road, Randy Turner, and his awesome 4 wheel drive pickup. He told us that the snow was so deep in the drive that it was dragging snow on the bottom. He was a welcome sight! 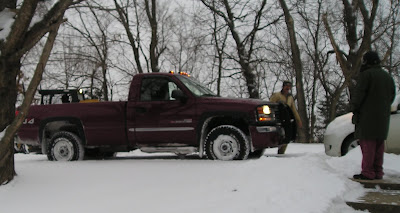 And this is Randy's son-in-law Jason. Jason lives straight across the road from us. Apparently last year Randy's dad, Bill, bought a Bobcat for them to play with. Randy says he just goes in circles but Jason can really manuever it. 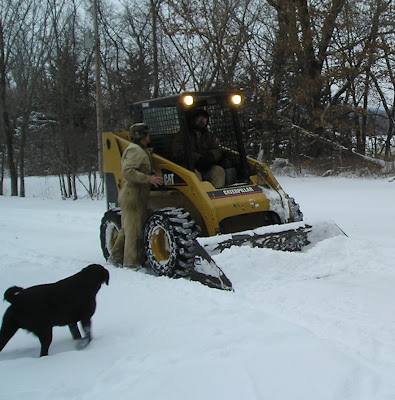 Jason bladed up the drive, by the office, around the barn, and dug out a path for the van to come out of the barn. He even bladed a wide path from the barn to the chicken yard so I wouldn't have to wade through the deep snow. 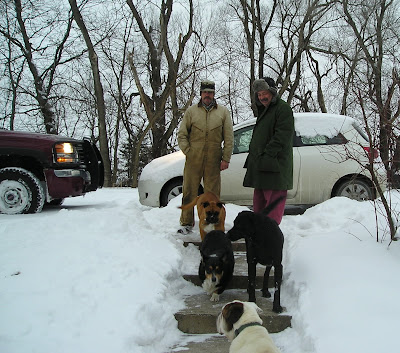 If you're going to live in the country, these are the kind of neighbors to have. We offered to pay them but they said it was the least they could do for people who didn't gripe when half their cows ended up in our front pasture. We know all about it. We've had cows. Cows don't want to stay where they're put.
When I made my Noah quilt years ago, you will notice that the cows are not with the other animals. :) 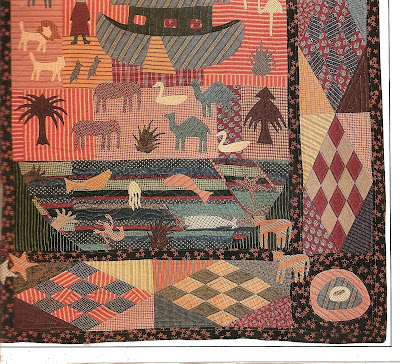 Noah will be in the Quiltmania book that's due to be published in April.
Lots of exciting things are happening this week.
First - in 2011, the 150th anniversary of the start of the Civil War, Barbara Brackman has a Civil War Quilts blog. She's doing a BOW (block of the week) to commemorate this event. As a historian, especially a quilt and textile historian, none can match her. I'll keep her Miss Liberty button on my side panel. Just click on the button to follow the events.
Next - and this is very exciting for me. Jan Patek Quilts is on Facebook. I've been invited by lots of people to be "friends on Facebook" but never have been able to figure out how. My son Max finally said, Mom you need to do this. I'll show you how. So, we're off and running this week. Come visit us on Facebook :) Watch for a Winter Warm-up sale to celebrate this event.
Oh - and thanks for your comments about the yo-yo's. My problem is not coming up with the ideas. I have an idea. My problems is making that many yo-yo's. I'll have to go check out Bunny Hill though. Thanks again. And if you want to join a club to have a chance at winning the Petit Fours, call Tara later today. The phone number is on the side panel.
Posted by Jan PATEK at 9:32 AM